The number of Bitcoin is becoming rare as only 9% is left to be mined for the next century, according to data from the Clark Moddy Bitcoin’s dashboard.

Per the announcement from Bitcoin Magazine, which firstly published the notification on Twitter on Tuesday local time, the remaining supply of BTC means “only 9% left to be mined over the next 118 years.”

The data platform shows that 91% of the Bitcoin has been mined, leaving less than 1.9 million units of BTC to be issued, while the total fixed supply of 21 million BTC remains unchanged. This scarcity of BTC could intensify the inflation of Bitcoin in the long term due to limited total supply, given that part of Bitcoin’s liquidity is locked up among whales. 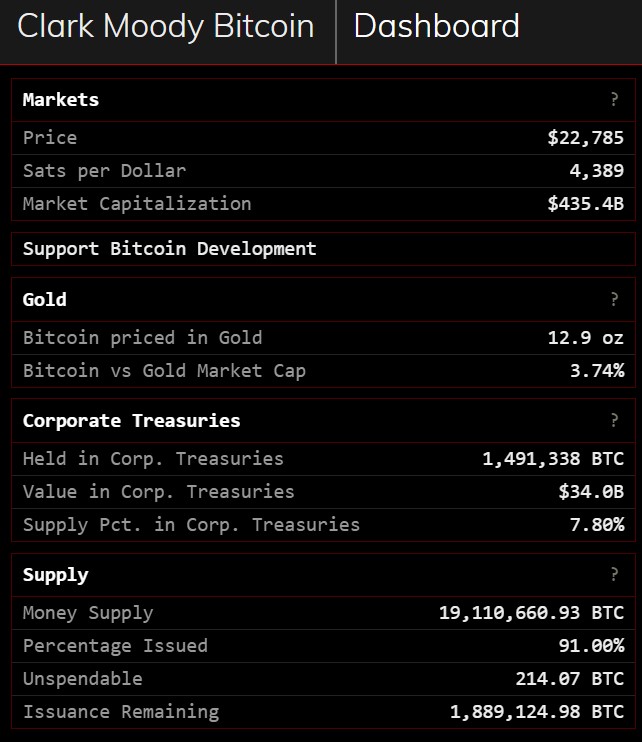 Subject to the mechanism of halving, referring to an exponential and periodic deduction reward rate for generating every new block of the crypto unit during the mining process, the reward of BTC mining has been halving three times over the last decade. Currently, crypto miners can be rewarded $6.25 BTC per block of crypto units. The next Bitcoin halving is expected to occur around April or May in 2024, followed by another mining halving reducing to 3.125 BTC for its rewards.

Despite the limited supply of Bitcoin and the reducing reward mechanism, it doesn’t stop crypto miners from the private sector from joining the market.

Previously, Bitcoin miner Core Scientific secured $100 million in financing amid the crypto downturn for upgrading its ability to mine more Bitcoins.

In terms of state level, El Salvador, as one of the major countries, adopted Bitcoin as a legal tender in 2021. Since last November, BTC’s price has dropped over 70% from its All-Time-High (ATH) at over $68,000. The nation defended its monetary policy, continuing to acquire more Bitcoins by adopting the buying dip strategy as well as conducting Bitcoin mining actively.

Yet, some developed countries, such as Sweden, prefer to save more electricity for creating jobs rather than using it for crypto mining to generate potential yield.

Bitcoin was trading between $22,800- $23,000 level during the Asia time trading section on Wednesday, with over $435.8 billion in terms of market capitalization.