Binance Chain’s [BNB] network growth continued to record impressive numbers. According to a tweet by Token Terminal on 20 January, the daily active users on the chain hit almost 778,000. This was more than the combined value of the next best performers on the list – Ethereum [ETH] and Polygon [MATIC].

Additional data pointed out that the daily active users for BNB have shot up by 10% in the last six months, at the peak of the crypto bear market. Conversely, the users for ETH in the same time period have plummeted by 14%.

On the daily timeframe, BNB broke out of the range on 4 January to commence its bullish run, during which it gained 22%. However, it has faced stiff resistance at $303. BNB breached this ceiling in November 2022 but faced rejection soon after.

The Relative Strength Index (RSI) steadily descended from the overbought zone, implying that sellers could control the market. The reading from the Moving Average Convergence Divergence (MACD) showed that a bearish crossover could be on the cards, which could weaken buying activity.

dApp activity shows promise, NFTs not so much!

On-chain data from Santiment implied that the network was profitable to BNB holders because of the high MVRV ratio. However, in pursuit of higher profits, willingness among traders to sell could increase, which could cause price correction.

Interest among whales reached its monthly peak on 20 January, suggesting that lucrativeness of BNB was not lost out on big addresses. On the other hand, NFT sales volume has plunged sharply in the last two days until press time.

BNB chain’s appeal is also reflected in its dApp activity. As per data from Dapp Radar, the BNB chain led other blockchains in the total number of dApps integrated in 2022, forming 36.7% of the market share. 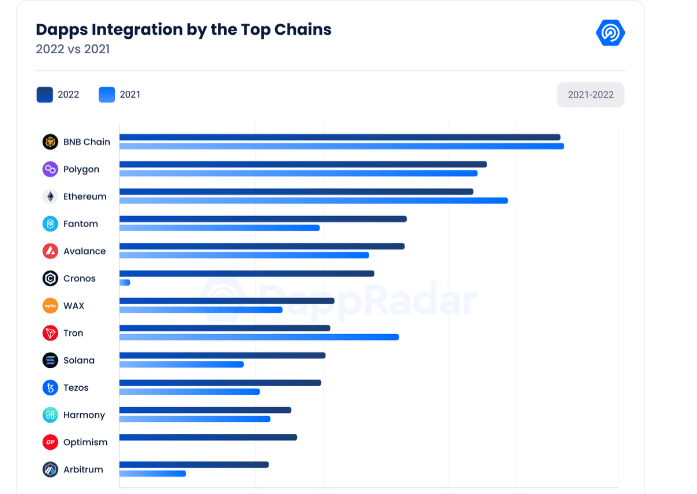 On 17 January, Binance announced the completion of its 22nd BNB burn event, where over two million tokens were moved out of circulation. More than 44 million tokens have been burned to date, as per data from BNBBurn.info.

As part of its broader program, over 100 million BNB, or half of its total supply, was intended to be removed from circulation through the burning process, thereby applying deflationary pressure on the token and increasing its value in the long run.